Hidden Hills is part of the City of Los Angeles, but in many ways the community is its own distinct world. While the community only covers about 1.7 square miles, the town offers a strong sense of community and organizes many community gatherings and events year-round. However the neighborhood is known not only for its successful and wealthy inhabitants, but also for its beautiful parks and nature preserves. Hidden Hills is also home to a number of historic sites including the Leonis Adobe National Historic Landmark and the historic El Camino Real.

The wealth and success present in Hidden Hills is an attractive target for an IRS that is attempting to maximize the returns it spends on its enforcement dollar. Simply due to having a significantly higher than average income, most individuals in Hidden Hills already face an increased tax audit risk. If you have other problems and concerns like an unaddressed Schedule B on your tax return when you hold foreign assets or other foreign disclosure issues, your risk of facing an audit is further increased.

If you have been contacted by the IRS about deficiencies in your tax filings, a need for additional information, or you suspect the mishandling of your taxes the Hoffman Tax Law Offices can help. To schedule a free consultation call our firm at 800-897-3915 or contact us online. 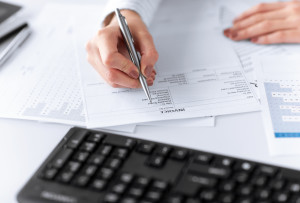 Why Am I Being Audited?

There a many reasons a taxpayer can come to face an audit. Some reasons are outside of the taxpayer’s control, but other factors are based on the characteristics or actions of the individual taxpayer. For instance, some taxpayers are audited simply because they were randomly selected by an IRS computer. While this answer is less than satisfying, it does show that even individuals who are or believe themselves to be 100% compliant with all tax and disclosure obligations can face an audit. Other factors largely outside a taxpayers control that can increase the risk of an audit also includes an audit due to association. If a party you have close dealings with has been audited and serious problems have been discovered, you too may face a related audit. Since you can’t control the actions of others, the best you can do is to engage with a tax professionally who can meticulously review your compliance with all tax obligations.

However, there are some factors within the taxpayer’s control that can significantly increase the odds of an audit. These factors include:

A taxpayer’s audit risk is based on random chance, characteristics of the taxpayer, and actions taken by the taxpayer. All individuals should strive to maintain compliance with the tax code and retain records showing that compliance for the requisite time period.

If you have been selected for a tax audit, the Hoffman Tax Law Office is experienced in handling sensitive matters such as these. To schedule a no-obligation  initial tax audit consultation call 800-897-3915 or contact us online today.